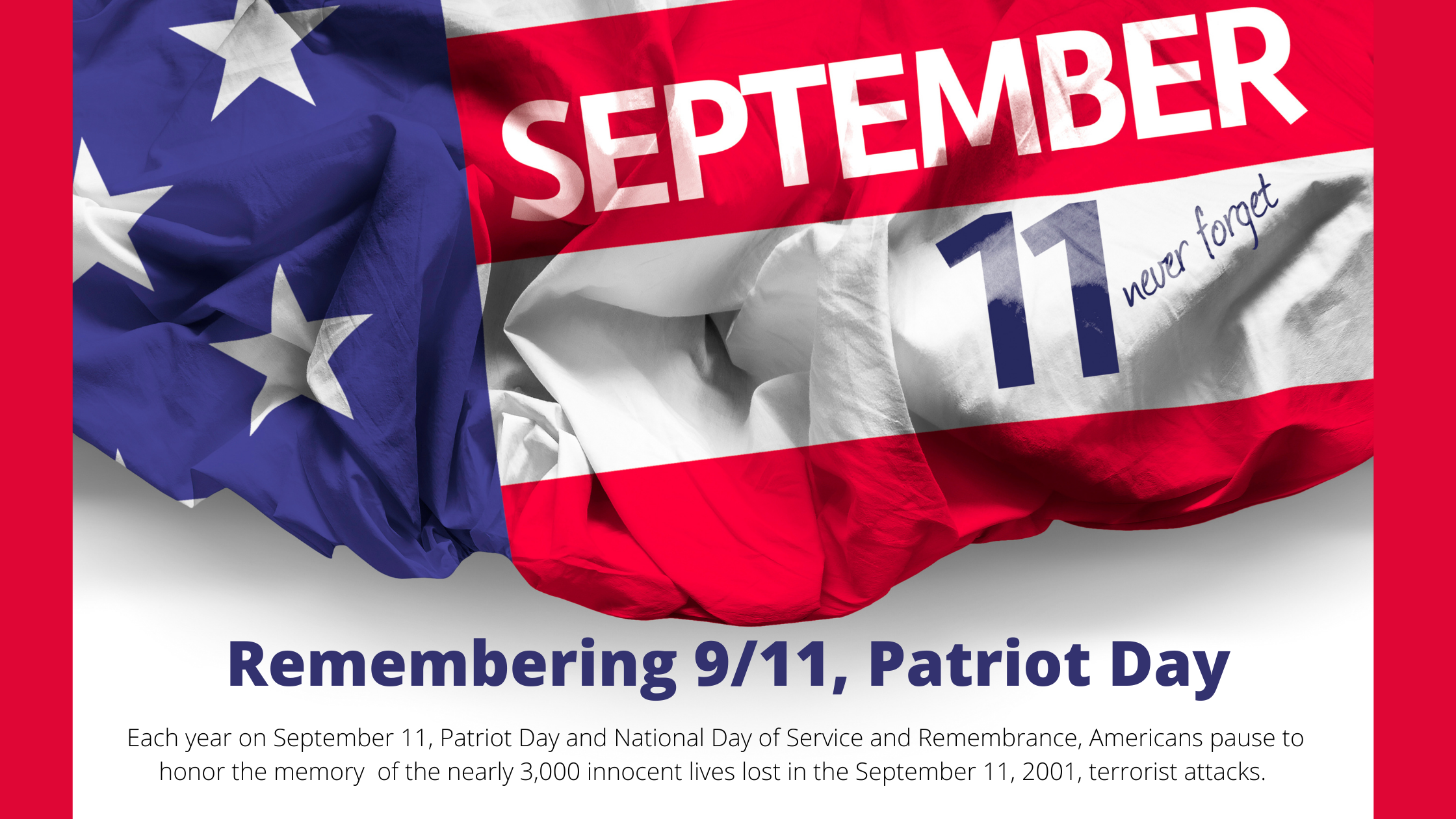 Each year on September 11, Americans pause to honor the memory  of the nearly 3,000 innocent lives lost in the September 11, 2001, terrorist attacks. Patriot Day and National Day of Service and Remembrance, declared by President Barack Obama on September 9, 2016, in his words , “I invite all Americans to observe this day with compassionate and selfless deeds that embody the values that define our people.“  On this day Americans across the country are called to volunteer in their local communities in tribute to the individuals lost and injured in the attacks, first responders, and the many who have risen in service to defend freedom.

For many, September 11, 2001, began like any other weekday. Everyone made their way to work, school, planned out their day of errands or chatted with friends over coffee. Across the country everyone not in New York City heard the first reports of a plane flying into one of the Twin Towers on the radio or television. Then a second plane flew into the other. Disbelief turned to uncertainty, fear, confusion and concern for the safety of the country. Ordinary citizens faced terror and obstacles they had never known. As a set of coordinated suicide attacks organized by the militant group Al Qaeda targeted the World Trade Center, the rest of the nation witnessed the unbelievable horror as a third plane crashed into The Pentagon and yet another crashed into a field in Shanksville, PA.

The loss of life, the loss of feeling of safety and security as a country (that a terrorist attack could never happen in the USA) and the impact to the nation is still felt to this day. As a nation mourned it also saw its bravest first responders, military members and average citizens show immense courage and compassion to save their neighbors and co-workers and begin the hard work of recovering and rebuilding a better and safer America.

Many choose, as part of their observation of the solemnity of the day, to have moments of silence and reflection or prayer throughout the morning at the times the events unfolded.

Attend a Ceremony: At this time, much of the country still has restrictions on gatherings due to the Covid-19 pandemic but many towns and cities have ceremonies and annual observances that are still happening. Some may even decide to stream these events themselves or local news outlets may cover and streams on social media platforms or websites. There may be opportunities to attend in person or via the internet.

Visit a Memorial: Another way to honor the memory of those who lost their lives that day is to visit a memorial dedicated to their memory and legacy. Many memorials share the stories and names of those individuals who made the ultimate sacrifice and offer a chance to independently honor those in a more private and quiet fashion. If an “in-person” visit isn’t possible at this time, a visit to a website for one or more of the memorials dedicated to the day is an alternative.

Get Involved: As part of former President Obama’s proclamation of Patriot Day and National Day of Service and Remembrance, he called upon Americans to “observe this day with compassionate and selfless deeds that embody the values that define our people”. Consider volunteering with an organization whose mission resonates with you and/or gives back to your community. Visit the official website of the National Day of Service and Remembrance to find volunteer opportunities in your community or to register a community project with them to help recruit volunteers to help with yours.

In a year when much of our everyday ordinary routines have been altered, may you find a way that resonates with you to honor and pay tribute to those whose lives were forever changed directly by the tragic events of 9/11. Whether you find solace in quiet reflection or choose to roll up your sleeves and (socially distant) stand shoulder to shoulder with your neighbors to improve your community, may you remember the true meaning of American spirit that shined through in the days, weeks and months after the events of that day and carry it with you always.

Back to School Discounts Too Good to Miss